When I moved into my new flat I knew with two crazy cats I needed to get them a really good activity centre. My new living room is huge and with a nice little empty space in a corner I thought they would really like a nice tall activity centre. My cats are crazy at the best of times so they really needed something to keep themselves occupied.

After looking around a lot of places and reading reviews I came across this songmics one.

the reviews I read were promising and I thought it looked like a good bet. When it arrived it was in a massive box and was too heavy to carry so it was best to unpack it where it was. It was all in pieces and I thought it could take me all day. I put an afternoon aside and built it. It didn't take as long as I expected it to and I managed to assemble it myself on my own with no problems at all. Once it was up I was really impressed, it looked great quality and appeared to be strong and sturdy.

I have had cat towers before that have been really flimsy and literally lasted a few weeks. It's a year later and this tower and activity centre is still going strong. Both of my cats use it, one of them really likes the little condo and the other prefers the top perch. 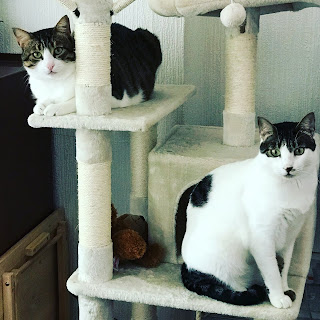 Here they are both enjoying it. They have both made use of the dangly ball toys and surprisingly have both used the scratching posts. There is just a tiny bit of wear on the faux fur trim beneath the top perch but that was where madam decided to destroy it. It hasn't affected it at all and a year later it's still just as sturdy and hasn't been flimsy or fallen apart at all.
My two are quite big cats and both aged three years and still fit on it easilly. my girl is quite heavy and she manages to use it without it wobbling or breaking. So it is perfect for any aged cat from kitten to adult and even seniors. I would highly recommend it as it has proven to be a good buy, slightly more expensive then some cheaper options but you get what you pay for. Cheaper ones would have needed replacing by now, whereas this is still going strong.

When I moved into my new flat I knew with two crazy cats I needed to get them a really good activity centre. My new living room is huge and ...

Teri Warke
I'm a writer and blogger currently living in Kent UK. I write childrens and adult fiction books as well as freelance articles. I run a reviewing blog where I post honest and truthful reviews of products I have purchased. My main passion in life is animals, I currently have two cats who I rescued from Egypt and my yellow Labrador Phoenix who is usually by my side. My other passion in life is Music, I previously worked in the music industry as an artist manager something I thoroughly enjoyed. I love going to indie rock gigs and muddy festivals. I strongly support unsigned acts and encourage aspiring musicians to never give up ontheir dream.